Egmont are delighted to reveal the cover for Storm, the final book in Sarah Driver’s epic Huntress trilogy, and to give readers the chance to read an exclusive extract of the book.

Storm is a stunning fantasy adventure, and the thrilling conclusion to the Huntress trilogy. It’s perfect for readers aged 9+ and fans of Philip Pullman, Piers Torday, Abi Elphinstone, Katherine Rundell and Frances Hardinge.

Storm will be published on 31 May 2018, and we are today delighted to reveal the fantastic cover for this exciting book.

Author Sarah Driver says ‘I’m a massive fan of the cover designs for The Huntress Trilogy and this cover is no exception! I think it really captures the epic drama of the series finale. I especially love the arrows, which I know Mouse would approve of, too!’

‘I’m excited for readers to get their teeth into this book because things just got A LOT more epic. Trianukka is writhing with magyk, the stakes are higher than ever before and Mouse and her crew will be tested beyond their limits as they battle to save their world.’

See the cover below, and read on for an exclusive preview from this exciting conclusion to the Huntress trilogy.

The Elders hook a patched cauldron over a fire, then pinch powder inside and feed lumps of resin to the flames. Sparks race each other into the air. The elders make a circle, linking hands. Steam noses over the edge of the cauldron, then coils up towards the damp cavern that yawns over our heads. The Elders crane their necks to watch the shapes made by the steam.

I scrunch my toes inside my boots.

‘A darkness spreads across all the sea, sky and land… the great wheel of Midwinter has turned, but new life fails to wake in the earth!’ croaks an Elder. ‘It is as we feared. The age of the Withering has befallen us!’ She rakes her wide, watery eyes through the crowd. Then she spits. ‘Sky gods save our souls.’

The fire claws at the sides of the cauldron. The steam thickens and writhes.

Draggle Riders are a goat-hardy, wind-sculpted folk. But still their frighted whispers leap into the air like sparks from a stabbed fire.

Pika, the tall, cinnamon-skinned Draggle-Keeper boy, buries his face in his hands. ‘All my life, I’ve been taught to fear the Withering,’ he whispers. ‘I can hardly believe it’s here.’

‘What is it?’ I ask, leaning forward to see him, sitting on the other side of Crow.

‘Death of light,’ he answers absently, eyes roaming the hall. ‘A long, cold night of dead things. If no life stirs, there’ll be a food shortage even worse than the one made by war.’

The Withering. I try to picture it, in my mind’s eye, but it’s hard to imagine a thing so vast. Not long ago – but exactly when, no one can agree on – dawn failed good and proper. Now we’re stuck in a grainy light, like a nightmare.

The steam from the cauldron twines and shifts, until I see grim faces with stretched eyes pulling upwards through the air. They swarm, until a heavy shadow hangs over the Elders.

One of the Elders throws a jug of water over the fire, smothering the flames. The steam dissolves slowly, the gaunt eyes fading into nothing. Something terrible is coming. Something worse than a Withering. Something even worse than Stag. I can feel it.

Stag’s army marches on, and up in the Sky fortress of Hackles, Mouse tries to keep hopeful as allies from different Tribes join forces to fight him. Mouse is forbidden to leave the mountain – but when their leader is kidnapped, she knows she must go in search of the last Opal, even if this means breaking her promise to Da.

Mouse is soon heading for the lands of the bloodthirsty Fangtooths. And as rumours fly about the return of an ancient evil, Mouse knows that she and her crew will soon face their biggest battle – for their Tribes, for their lives – for their world as they know it. The storm is coming…

Pre-order your copy of Storm today on Amazon.

The Huntress Trilogy – the story so far

The first book in the Huntress trilogy by Sarah Driver is Sea, a sea-churning, beast-chattering, dream-dancing, whale-riding, terrodyl-flying, world-saving adventure, published by Egmont in April 2017.

‘In the sky, the fire spirits dance and ripple. Grandma says they showed our Tribe that I’d be a captain, before I was even born.’

Ever since Ma died, Mouse has looked after her little brother, Sparrow, dreaming of her destiny as captain of the Huntress.

But now Da’s missing, Sparrow is in danger, and a deathly cold is creeping across Trianukka…

‘A glorious world, a wild adventure and a fierce heroine. I can’t stop thinking about this book!’ – Robin Stevens, author of Murder Most Unladylike

Sea was Waterstones Children’s Book of the Month for March 2017.

The second book of the Huntress trilogy, Sky, was published in September 2017.

‘Seek the scattered Storm-Opals of Sea, Sky and Land, before an enemy finds them and uses them to wield dark power…’

The trail of the Storm-Opals takes Mouse further than she has ever been before.

With her little brother Sparrow and friend Crow alongside her, she stumbles into the world of Sky, where fortresses are hidden amongst the clouds, secret libraries (skybraries) nestle atop gigantic icebergs and the sky swirls with warring tribes and their ferocious flying beasts.

Can they solve Da’s message before it’s too late for their ship, their tribe and the whole of Trianukka?

Sarah Driver is a graduate of the Bath Spa MA in Writing for Young People, during which she won the United Agents Most Promising Writer prize in 2014.  She is also a qualified nurse and midwife.

Sarah started writing stories as a small child and lists her influences as Spellhorn by Berlie Doherty, A Necklace Of Raindrops by Joan Aiken and the Carbonel books by Barbara Sleigh – those gorgeous, magical stories that create and nurture readers.

Sarah lives in Sussex, close to the sea, with Lily, a street-wise ginger cat and an excitable mini-lop bunny named Peter. 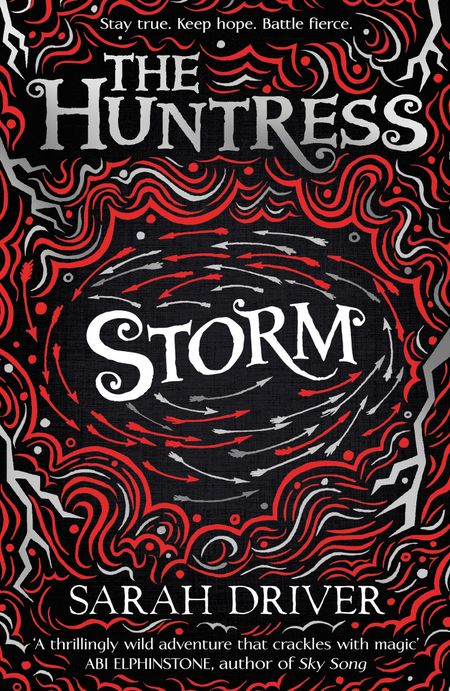