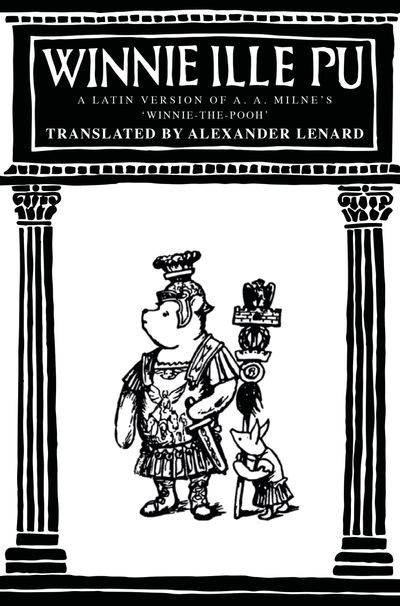 A.A. Milne’s irrepressible Winnie-the-Pooh is translated in Latin in Ille Pu. Now back in print with a new introduction. Featuring E.H. Shepard’s original illustrations throughout, Ille Pu is the perfect gift for those studying Latin or indeed for any fan of the “Bear of Very Little Brain…. Originally a hit with critics and classicists alike, this is a truly novel offering.

The nation’s favourite teddy bear has been delighting generations of children for 90 years.

Milne’s classic children’s stories – featuring Piglet, Eeyore, Christopher Robin and, of course, Pooh himself – are both heart-warming and funny, teaching lessons of friendship and  reflecting the power of a child’s imagination like no other story before or since.

Pooh ranks alongside other beloved character such as Paddington Bear, and Peter Rabbit as an essential part of our literary heritage. Whether you’re 5 or 55, Pooh is the bear for all ages.

A.A. Milne is quite simply one of the most famous children’s authors of all time. He created Winnie-the-Pooh and his friends Piglet, Eeyore, Tigger, Kanga and Roo based on the real nursery toys played with by his son, Christopher Robin. And those characters not only became the stars of his classic children’s books, Winnie-the-Pooh and The House at Pooh Corner, and his poetry for children, they have also been adapted for film, TV and the stage. Through his writings for Punch magazine, A.A. Milne met E.H. Shepard. Shepard went on to draw the original illustrations to accompany Milne’s classics, earning him the name “the man who drew Pooh….

Alexander Lenard was a Hungarian writer, poet, artist, linguist and teacher. His Latin translation of Winnie-the-Pooh, which took seven years to complete, was published in the UK in 1960 and immediately became a bestseller.