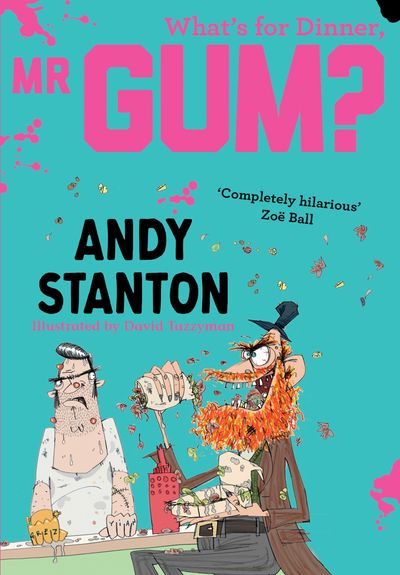 Shabba me whiskers! It’s one of those Mr Gum books by Andy Stanton. They’re only the craziest, funnest most amazing books for children in the world. This is book six.

Mr Gum’s back! But what’s he up to this time? Oh, dreadful things my friends, dreadful things indeed. It seems he’s found himself a brand new treat – rancid kebabs just dripping with dirty grey sauce. And he just can’t get enough of them. He’s gotta have more! More! Less! I mean, More! But not everyone’s too happy about Mr Gum’s new dinnertime arrangements and soon the town of Lamonic Bibber is gearing up for war. Can Polly and her friends save the town from being torn apart? Will Mr Gum’s hunger ever be satisfied? And who on earth is Thora Gruntwinkle? All will be revealed when you read “What’s For Dinner, Mr Gum?” You’ll see a gingerbread man driving through London! You’ll see an annoying little monkey driving everyone mad! You’ll see Friday O’Leary falling asleep in a hedge! Yes, it’s all there in glorious black and white, my friends. Except for the cover, which is in colour. It’s Bonus.

Perfect for fans of Roald Dahl and David Walliams.

Have you collected all the well brilliant Mr Gum series?

Mr Gum and the Biscuit Billionaire

Mr Gum and the Goblins

Mr Gum and the Power Crystals

Mr Gum and the Dancing Bear

Mr Gum and the Cherry Tree

Mr Gum and the Secret Hideout

Worryingly splendid’ Guardian NOT FOR BORERS!

Andy Stanton studied English at Oxford but they kicked him out. Before becoming a children’s writer he was a film script reader, a market researcher, an NHS lackey, a part-time sparrow and a grape. Today he is best-known for the hilarious and much-loved Mr Gum books, which are published in 34 countries worldwide in over 30 languages. The series has won numerous awards, including the inaugural Roald Dahl Funny Prize, the Red House Children’s Book Award and two Blue Peter Book Awards.

Shabba me whiskers! It’s one of those Mr Gum books by Andy Stanton. They’re only the craziest, funnest most amazing books for children in the world. This is book six.