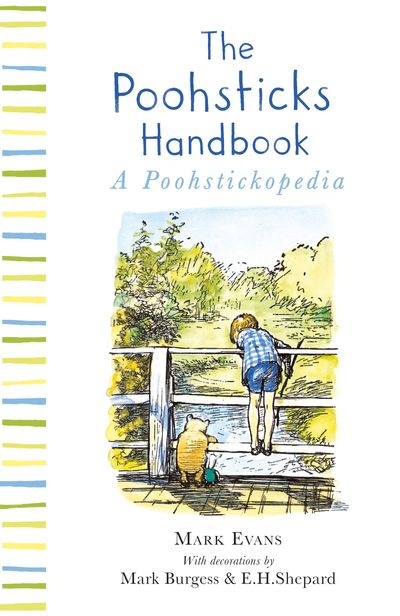 Poohsticks is, at its simplest, a game of sticks and rivers and bridges and friends and fun.’

Playing Pooh Sticks is one the National Trust’s 50 Things To Do Before You Are 11 and ¾ – it is game beloved of adults and children alike. Mark Evan’s charming and funny text guides us through the intricacies of Pooh Sticks – from a brief history of the game (invented, of course, by Pooh Bear himself in The House at Pooh Corner) to strategies that can help avoid a soaking. We find out what the perfect Pooh stick looks like, what the optimum location is and about notable games of Pooh sticks throughout history. The book ends with FAQ About Poohsticks, which Winnie-the-Pooh thinks stands for ‘Food Always Quitenice’

Milne’s classic children’s stories – featuring Piglet, Eeyore, Christopher Robin and, of course, Pooh himself – are both heart-warming and funny, teaching lessons of friendship and  reflecting the power of a child’s imagination like no other story before or since.

Pooh ranks alongside other beloved characters such as Paddington Bear, and Peter Rabbit as an essential part of our literary heritage. Whether you’re 5 or 55, Pooh is the bear for all ages.

Poohsticks is, at its simplest, a game of sticks and rivers and bridges and friends and fun.'