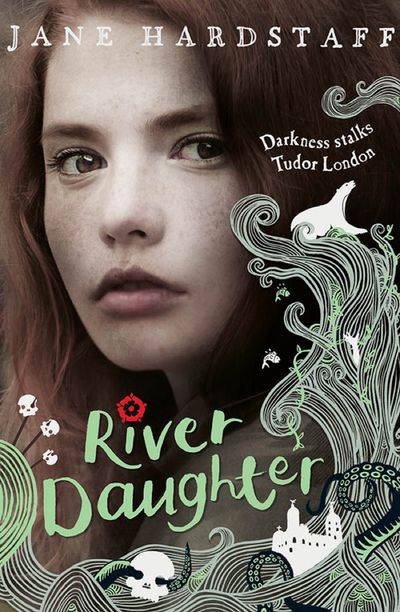 You cannot fight me, river daughter. You were promised to me. A child born in water, you shall return to water.’

The sequel to The Executioner’s Daughter, a thrilling adventure set in the Tower of London in Tudor times. Perfect for fans of Philippa Gregory’s ‘Order of Darkness’ series and Percy Jackson.

More than a year has passed since Moss was released from the clutches of the Riverwitch. Now her father has swapped his bloody axe for a blacksmith’s forge and they have moved away from London, taking Salter with them.

But strange things are happening on the river and the Riverwitch is lurking again. Moss has no choice but to leave her new home on a deadly journey to put an end to the evil that is enveloping the Tower like a stinking fog. It’s a decision that may cost her her friendship with Salter and ultimately her life.

A thrilling read for fans of historical fiction aged 9+.

Jane Hardstaff is a major new voice in children’s historical fiction. She longed to be an artist, but somehow became a TV producer. She grew up in Wiltshire with her brothers, hunting mayfly-nymphs with her father and reading fairytales with her mother. Now she lives in London’s East End, near the great, wild River Thames – the inspiration for her novels.

Praise for The Executioner’s Daughter

‘This notable debut mixes vivid history with supernatural adventure and from its dark depths friendship, forgiveness and parental love rise to the surface.’ Nicolette Jones, The Sunday Times

‘A strong new voice in children’s fiction… draws a wonderfully authentic portrait of a wilful tween desperate to find out more about her origins… Worth locking yourself up for an afternoon’s reading pleasure.’ Alex O’Connell, The Times

‘Putting a different spin on the Tudor period, this pacy historical tale paints an intriguing and authentic picture of the times that will fascinate young fans of history. With some spooky and gruesome moments, it is best suited to readers of 11 and above, but older children will find much to enjoy in Hardstaff’s gripping adventure.’ Booktrust

The Executioner’s Daughter was chosen as Children’s Book of the Week by The Sunday Times and The Times.

You cannot fight me, river daughter. You were promised to me. A child born in water, you shall return to water.'

The sequel to The Executioner's Daughter, a thrilling adventure set in the Tower of London in Tudor times. Perfect for fans of Philippa Gregory's 'Order of Darkness' series and Percy Jackson.