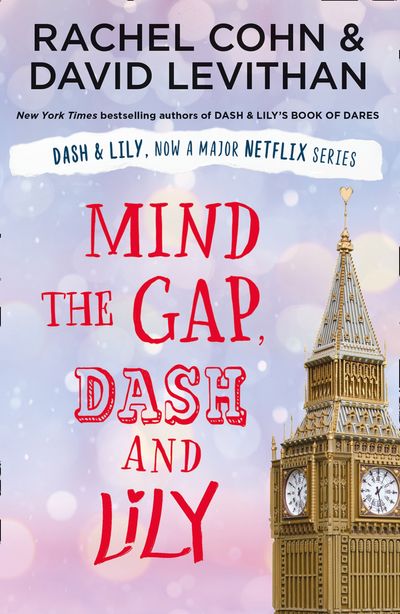 Mind the Gap, Dash and Lily

‘After reading this I wanted to read it all over again’ – Zoe Sugg (aka Zoella) on The Twelve Days of Dash and Lily.

Dash and Lily are feeling closer than ever … so it’s too bad that they’re also an ocean apart. After Dash gets accepted to Oxford University and Lily stays in New York, the couple are struggling to make a long distance relationship work. And when Dash breaks the news that he won’t be coming home to New York for Christmas, Lily makes a decision: if Dash can’t come to New York, she’ll go to London. But will Lily pull off the ultimate surprise …?

A heart-warming wintry read that is guaranteed to be a favourite Christmas book for years to come.

Look out for David and Rachel’s other young adult novels: Nick and Norah’s Infinite Playlist and Naomi and Ely’s No Kiss List.

Also by David Levithan, Every Day, Another Day, Marly’s Ghost, Two Boys Kissing, How They Met and Other Stories.

David is the New York Times best-selling author of Boy Meets Boy and Marly’s Ghost. While among his many collaborations are Will Grayson, Will Grayson with Fault in Our Stars author John Green, and Nick and Norah’s Infinite Playlist with Rachel Cohn, which became a major film. Tiny Cooper from Will Grayson, Will Grayson, now has his own novel: Hold Me Closer: The Tiny Cooper Story. David is also a highly respected children’s book editor, whose list includes many luminaries of children’s literature, including Garth Nix, Libba Bray and Suzanne Collins. He lives and works in New York.

Rachel Cohn was born in Maryland, but later moved to New York. Her first novel, Gingerbread, was published in 2002. Since then she has gone on to write many other successful young adult and children’s books, several in collaboration with David Levithan. She now lives and writes in Los Angeles, assisted by two very cool cats.

Mind the Gap, Dash and Lily

'After reading this I wanted to read it all over again' – Zoe Sugg (aka Zoella) on The Twelve Days of Dash and Lily.