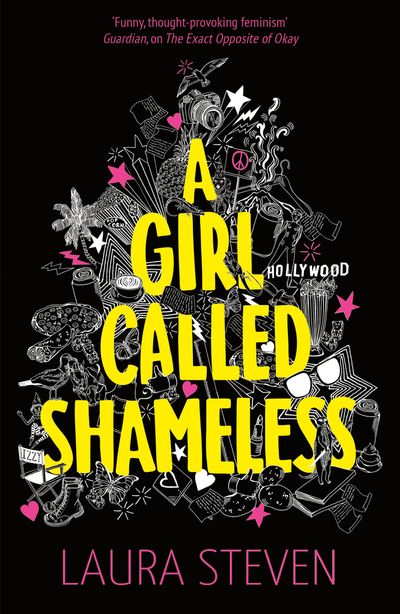 WINNING author of the inaugural Comedy Women in Print prize 2019.

‘A brilliant social satire … disarmingly charming and relatable … it was hilarious. Laura Steven is an explosive talent on the page!’ CWIP judges Marian Keyes, Kathy Lette, Katy Brand, Allison Pearson, Shazia Mirza and Jennifer Young on The Exact Opposite of Okay

Funnier. Ruder. Angrier. Izzy O’Neill is back in the hilarious sequel to The Exact Opposite of Okay.

Izzy and her best friend Ajita are as hilarious as ever, using comedy to fight back against whatever the world throws at them, but Izzy is still reeling from her slut-shaming ordeal, feeling angry beyond belief and wondering – can they really make a change?

For readers of The Hate U Give by Angie Thomas, Doing It by Hannah Witton, Love Simon and Leah on the Offbeat by Becky Albertalli, and Goodnight Stories for Rebel Girls by Elena Favilli and Francesca Cavallo.

The Exact Opposite of Okay has been shortlisted for the inaugural Comedy Women in Print prize 2019.

Praise for The Exact Opposite of Okay:

‘Laura Steven simultaneously destroyed the patriarchy and made me laugh so hard I choked. I will protect Izzy O’Neill with my life.’ Becky Albertalli, author of Love Simon

‘Funny, unapologetic and shameless in the best possible way, this is a YA heroine (and book) that you’ve never seen before’ – Louise O’Neill, award-winning author of Asking for It

‘This book will make you laugh out loud, nod in agreement, cringe with recognition, and stand up and cheer. I adored it’ – Katherine Webber, author of Wing Jones

‘I LOVED this book! A really smart, relevant and switched-on exploration of teen sexuality, gender and slut-shaming’ – Katherine Woodfine, bestselling author of The Sinclair’s Mysteries

Laura Steven is an author, journalist and screenwriter from the northernmost town in England. She has an MA in Creative Writing and works at a non-profit organisation supporting women in the creative arts. Her TV pilot, Clickbait, was a finalist in British Comedy’s 2016 Sitcom Mission. She lives in Newcastle.

It's been a month since the release of A Called Called Shameless, the sequel to The Exact Opposite of Okay by Laura Steven, and Instagram has definitely shown some love. Read More

WINNING author of the inaugural Comedy Women in Print prize 2019.