Pirates and girl power come together in Captain Sparklebeard

Best-selling author, Timothy Knapman, and award-winning illustrator, Sam Lloyd, have joined forces to create a pirate story with a twist: featuring a book-loving rebel who dares to be different!

When Peg is rejected by the crew, she decides to redefine what it means to be a pirate and transforms into Captain Sparklebeard. Her determination, ambition and self-belief will inspire a whole new generation of rebel girls. Knapman’s empowering story is paired with vibrant, distinctive illustrations from Lloyd to create an uplifting adventure that’s guaranteed to stick with you long after reading. Featuring an inclusive cast of characters, this is a must-have book for giving young children the courage they need to be themselves.

Captain Sparklebeard will be published on 07 March 2019, just in time for International Women’s Day.

Tim Knapman writes plays, musicals, songs and children’s books and has been published by Simon & Schuster, Puffin, Macmillan, Scholastic, Hachette, Egmont UK and many more. His previous books include the bestselling Dinosaurs in the Supermarket, Dinosaurs Don’t Have Bedtimes and Superhero Dad. His books have been translated into 20 languages and several have been read on CBeebies bedtime stories. Tim lives in Surrey and his hobbies include swashbuckling.

Sam Lloyd is the illustrator behind the bestselling Mr Pusskins series which won the Roald Dahl Funny Prize, the Booktrust Pre-School Award and was shortlisted for the V&A Illustration Award. Her novelty books include the Richard and Judy prize-winning Calm Down, Boris and Hello Dudley. Sam’s books have been translated into over 15 languages. Sam lives in Brighton with her son Ozzy and their ginormous ginger cat. 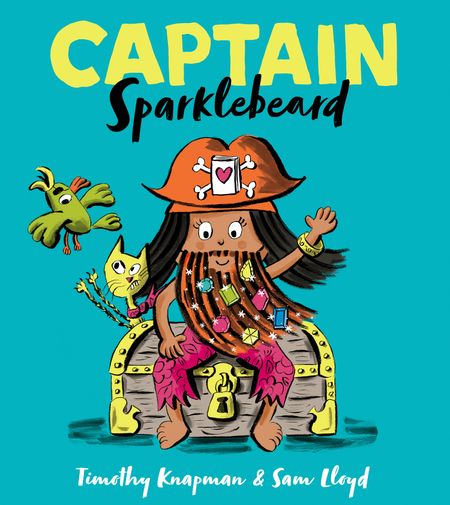