From Russia with Cake: Researching Spies in St. Petersburg

To celebrate the release of Spies in St. Petersburg, the second book in the Taylor and Rose series, author Katherine Woodfine writes a special guest feature for the Egmont website.

When I started writing my Taylor & Rose Secret Agents series, I knew that I wanted to take heroines Sophie and Lil  beyond London. These new books would see them turn from Edwardian girl detectives to intrepid secret agents – and in the grand tradition of spy stories from James Bond to Alex Rider, I wanted their adventures to take them to different cities around Europe and beyond.

Taylor & Rose Secret Agents would be set in 1911 and 1912 – so to begin with, I started thinking about some of the cities that would be especially interesting to explore during that period. Belle époque Paris was an obvious choice, and became the setting for the first book, Peril in Paris.

But where should Sophie and Lil go next?

St Petersburg seemed an intriguing option: a few years before the Russian Revolution, there would be tensions brewing in the city. The more I read about it, the more I felt certain that with its atmosphere of suspense, intrigue and mistrust, St Petersburg in 1911 would be the perfect setting for Sophie and Lil’s next adventure.

But whilst writing about Paris had been easy – I already knew the city relatively well, and could speak some French – I knew hardly anything about St Petersburg. There was only one thing to do: I’d take a research trip to explore the city for myself.

Here are some of the highlights from our very own St Petersburg adventure:

From classic borscht and plates of rainbow-coloured pickles to sour cherry dumplings, honey cakes and tarragon lemonade, we tasted as many Russian delights as possible – an essential part of the research process!

Finding our way around the city

Well, truth be told, Louise, my literary agent, found her way around the city and I followed her, since I have a terrible sense of direction! But we did lots of exploring, walking about 10 miles around the city streets each day.

We also took a walking tour, which was a great way to get an overview of St Petersburg, and our tour guide gave us all kinds of information about the city’s history, culture and architecture, some of which ended up being unexpectedly helpful for the book.

One of the highlights for me was the Fabergé Museum – a treasure trove of gorgeous glittering objects which helped me imagine the fictional jeweller Riviere’s which appears in Spies in St Petersburg.

I also loved the Hermitage which has an incredible wealth of amazing art. We also explored the likes of the Museum of Political History and even the Soviet Video Games museum, where you can have a go at playing some of the vintage games for yourself.

Scouting out locations from the book

I already knew where I wanted some of the key scenes in the book to take place, so it was fun to hunt down the locations in real life – from the Ciniselli Circus building (pictued above – still used for circuses today – we peeped through a back gate and spied an elephant in the yard) to the glorious Summer Gardens (where just like the Count and Sophie, we paused for cakes and lemonade).

Seeing the city from the water

There’s water everywhere in St Petersburg, from the canals and fountains to the River Neva to the sparkling Gulf of Finland beyond.

We took a boat to visit the magnificent Peterhof Palace (pictured), and being out on the water played a big part in helping me to imagine the final scene in Spies in St Petersburg. There was even time for a paddle!

Soaking up the atmosphere

Most importantly, I wanted to know what St Petersburg felt like. Although the city today would be very different to the one Sophie and Lil would have experienced over 100 years earlier, I wanted to take in the small details that would help me bring St Petersburg to life.

I made lists of everything from the sounds and smells of the city to the colours I noticed around, and of course, an all-important record of all the delicious things we ate, many of which made their way into the book!

If you read Spies in St Petersburg I hope you’ll enjoy being transported to this magical Russian city.

Spies in St Petersburg by Katherine Woodfine publishes 02 May 2019. 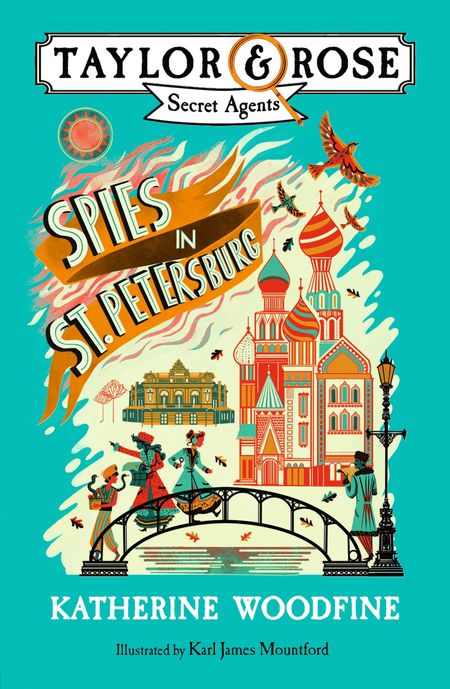