Author Katherine Woodfine’s latest book, Peril in Paris, is released this week. To celebrate, she’s written a blog post for Egmont all about her research for Sophie Taylor and Lilian Rose’s new adventure in Paris!

One of my favourite things about writing historical fiction is research. I’m a bit of a history nerd, and love nothing better than poring over old maps and photographs, and learning all about the details of what people ate and what they wore (find out more about how I research my books).

My brand new series, Taylor & Rose Secret Agents is no exception. Set in 1911, it follows the heroines of the Sinclair’s Mysteries, Sophie and Lil, as they plunge into the thrilling new world of Edwardian espionage. In the first book, Peril in Paris, we see them embarking on an undercover mission to Paris for the mysterious Secret Service Bureau. There, they soon find danger is lurking amongst the elegant hotels and grand boulevards of the city…

When I was writing Peril in Paris, I had lots of research to do. I wanted to read about the early years of the real-life Secret Service Bureau – the government department that would later become MI5 and MI6. I wanted to find out what it might have been like being an Edwardian spy, and to read lots of spy thrillers. I also needed to find out all about travelling in 1911, which saw me examining old train timetables, and researching the peculiarities of Edwardian passports.

But most importantly of all I wanted to visit Paris itself! Although I’ve visited lots of times before, I wanted to make a special trip to wander the Paris streets and try and imagine myself back in the city as Sophie and Lil would have seen it, over 100 years ago. In 1911, Paris was a very splendid place – a centre for culture, in particular fashion, art and literature, with grand hotels, beautiful architecture and fabulous entertainment.

In Peril in Paris, our heroines arrive in the city by train – so I decided to do the same, whizzing to Paris on the Eurostar and arriving at the Gare Du Nord, just like Sophie at the start of the book. I stayed in a hotel near the Panthéon – lovely, though not nearly as luxurious as the (fictional) Grand Hotel Continental where Sophie finds herself staying!

The hotel was close to the Sorbonne University, an important location for Peril in Paris, as Sophie is given the task of investigating the strange murder of a Professor who works there. I spent some time exploring the area, scouting out possible locations for the Professor’s apartment, and (of course) sitting outside cafés, watching the world go by.

The next stop was Montmartre, which Sophie also visits when she’s on the trail of the Professor. The café she goes to in the story is partly inspired by the real life Au Lapin Agile which was popular with Paris artists of the time – and the glamorous night-spot La Lune Bleue, is of course inspired by the famous Moulin Rouge itself.

The Musée d’Orsay was the perfect place to check out some of the Paris art of the 1910s.

I also looked at grand Paris buildings, such as Le Petit Palais, to help me imagine the venue for the elegant dinner party Sophie attends in the book; and found more inspiration from promenading in the Tuileries Garden and the Jardin du Luxembourg.

An important element of any trip to Paris is, of course, shopping! Sophie and Lil are too busy with their mission to have much time for enjoying Paris fashions, but just the same, I went to explore the beautiful old-fashioned shopping arcades which were built in the 19th century, and would have been an important feature of the city at the time of their visit.

I also visited the classic Parisian department store, Galeries Lafayette which reminded me of Sinclair’s, and fabulous Left Bank bookshop Shakespeare and Company where I spotted some of the Sinclair’s Mysteries books on the shelves.

Finally, an essential part of my trip was enjoying lots of delicious things to eat!

From chocolate eclairs to sumptuous strawberry tarts and perfect pink macarons, it was only right and proper that I did some very serious and important author research by trying some tasty Parisian treats, as of course Sophie and Lil do in the story.

Au revoir for now Paris – I wonder where Sophie and Lil’s adventures will take them (and me) next?

You can take a look at some more of my Parisian inspirations on my Peril in Paris Pinterest board. To celebrate the publication of the book, I’m headed back to Paris for a celebratory day out – so follow me on Twitter or Instagram to see what I get up to!

About Peril in Paris

On a case for the mysterious SECRET SERVICE BUREAU, the daring MISS SOPHIE TAYLOR and MISS LILIAN ROSE must leave London for the boulevards and grand hotels of Paris.

But DANGER lurks beneath the bright lights of the city – and INTRIGUE and MURDER lie in store.

As aeroplanes soar in the skies overhead, our heroines will need to put all their spy skills to the test to face the PERIL that awaits them…

Peril in Paris is published on 09 August 2018 – order your copy today! 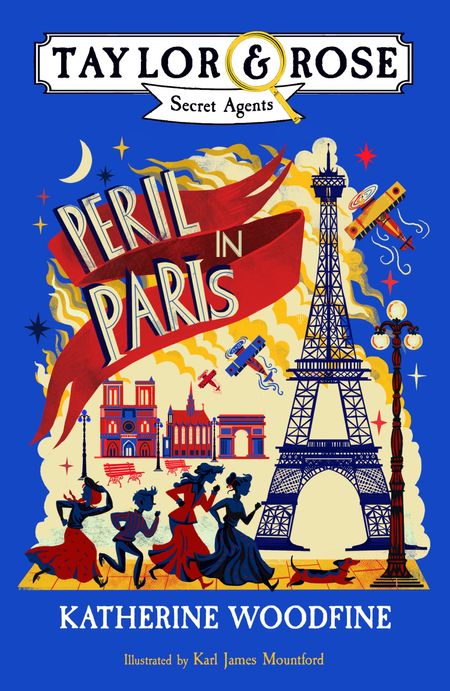