Egmont Publishing is thrilled to announce a picture book adaptation of The Wizard of Oz, publishing this September.

The much-loved story by L. Frank Baum will be retold by Sam Hay and illustrated by Meg McLaren, and published by Egmont on 06 September 2018.

Hay and McLaren’s modern adaptation of The Wizard of Oz celebrates Baum’s key themes of friendship, bravery, kindness and the importance of home.

In this introduction to the classic adventure, Little Dot and her companions face new challenges on their journey along the yellow brick road.

Hay’s imaginative retelling combines with McLaren’s friendly, colourful artwork to create a younger, pre-school heroine who will appeal to a new generation of picture book readers.

Melissa Fairley, Egmont’s Publishing Director for Picture Book and Gift, said ‘Meg McLaren has reimagined Dorothy as a sturdy pre-schooler and the Tin Man as a small tin can. Paired with Sam Hay’s original adaptation – where giant jelly snakes block the Yellow Brick Road and the witch is defeated by a pot of yoghurt – this is an exciting adventure story for very young children.’

Sam Hay added ‘The Wonderful Wizard of Oz was a book I loved as an older child, so it’s been an exciting challenge to re-imagine such a rich and colourful story for much younger readers.’

Meg McLaren said ‘It’s been a real treat for me, and a challenge, to reimagine Baum’s beloved characters. I hope my illustrations will reflect my affection for the original book whilst capturing the fun, adventurous spirit of Sam’s new text.’

Melissa Fairley signed the deal for world language rights with Gemma Cooper at The Bent Agency and Paul Moreton at Bell Lomax Moreton.

The Wizard of Oz by L. Frank Baum, adapted by Sam Hay and illustrated by Meg McLaren, will be published on 06 September 2018 in paperback for £6.99, for age 3 and up.

Sam Hay grew up in Scotland in a family of bookworms. She always wanted to be a writer and filled endless notebooks with stories and poems.

She trained as a journalist in Edinburgh and went on to work in newspapers and for the BBC in London, before moving to Wales and becoming a full-time children’s writer.

Since then she’s had more than 30 children’s books published, including Star in the Jar and Do Not Wash this Bear, both published by Egmont.

Meg McLaren is an illustrator, picture book maker and printmaker, working digitally and in screen print, based in Inverness.

She graduated with an MA in Children’s Book Illustration from Cambridge School of Art and has published several picture books including Life is Magic and Pigeon P. I. 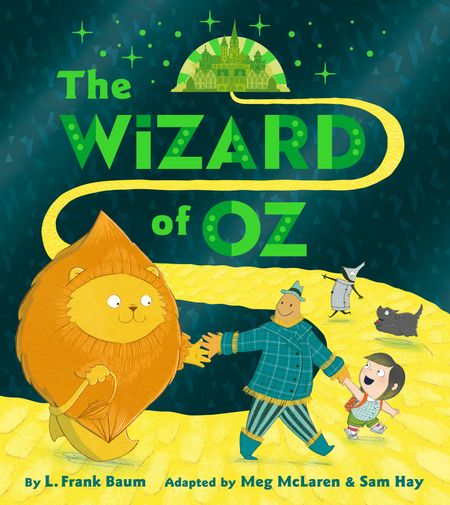