Written for his younger brother and sister in response to the Covid-19 pandemic, The Great Realisation by Tomos Roberts (Tomfoolery) is as timely as it is timeless. Posted online in April 2020, his poem instantly struck a chord, having been viewed over 60 million times and translated into more than 20 languages. Its message of positivity and resilience has captured the hearts of children and adults all over the globe – notably the team at Egmont Books. Working in collaboration with HarperCollins US, Egmont Books have snapped up World English Language rights for the picture book adaptation of Roberts’ uplifting poem. The fairer, more sustainable, and inspiring world in Roberts’ poem will be brought to life by Kate Greenaway Medal nominee Nomoco.

Melissa Fairley, Publishing Director at Egmont Books, and David Linker, Executive Editor at HarperCollins US, signed the deal for World English Language rights with Creative Artists Agency. The Great Realisation will also be published simultaneously by HarperCollins India, and by HarperCollins Australia in Australia and New Zealand.

Written in the form of a bedtime story, The Great Realisation is a celebration of the things – from simple acts of kindness and finding joy in everyday activities, to the heroic efforts of our key workers – that have brought us together during lockdown and given us hope in this time of global crisis. It is a profound work, at once striking and reassuring, a way to remind readers young and old that in the face of adversity there are still dreams to be dreamt and kindnesses to be shared and hope. There is still hope.

Tomos Roberts said: ‘I am so grateful to be able to share the story of The Great Realisation with readers around the world. I hope it can be useful to people and serve as a reminder of the time and an encouragement to any who believe improvement is possible. Thank you to all the people who have made this possible.’

Cally Poplak, MD, Egmont Books said: ‘Joining the HarperCollins family has given free rein to Egmont’s big ambitions to grow the business. I am delighted that Melissa Fairley has been able to join forces with our new colleagues across the HarperCollins Group to lead the acquisition of this hugely uplifting book for our times.’

David Linker, Executive Editor, HarperCollins US said: ‘In these difficult times, Tomos Roberts has given voice to what many of us have been so desperately searching for – a vision of hope. I’m so thrilled to partner with him, and with the award-winning illustrator Nomoco, to translate his words of inspiration into picture book form.’

Cristina Cappelluto, Publishing Director, HarperCollins Children’s Book Australia said: ‘The Great Realisation offers parents a gentle entry point to discuss some of the more confronting and anxious moments of 2020 with their children. But most importantly, it also offers hope and optimism for a better future and in so doing is the panacea we all need right now.’

Tomos Roberts (Tomfoolery) is a spoken word poet, performer and filmmaker, born in New Zealand and brought up in London. He launched his YouTube platform on 22 March 2020 and, just five weeks later, uploaded a performance of The Great Realisation, featuring a cameo from his seven-year-old brother. The video has since been viewed over 60 million times.Tomos has since been interviewed on This Morning, by Phillip Schofield and Holly Willoughby, and his story has been reported all over the world, including in the Daily Mail and the Washington Post. Celebrities including Jennifer Aniston, Drew Barrymore and Jake Gyllenhaal have praised his heartfelt work. Tomos lives in London. Twitter: @probstomfoolery, Facebook: @probablytomfoolery, Instagram: @probablytomfoolery

Nomoco is a Japanese artist and illustrator, whose joyful watercolour artwork has been publishing and exhibited all over the globe. She is the illustrator of Once Upon a Raindrop, written by James Carter, which was nominated for the Kate Greenaway Medal 2020, as well as being shortlisted for the UKLA Award 2020, Information Books category. She lives in Tokyo. 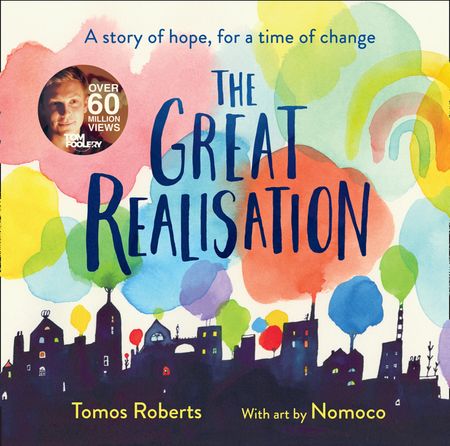