Egmont chatted to the author and illustrator of this hilarious new book to find out more about the inspiration behind the rather unusual star of the series.

Sam has wanted a dog for AGES, so when Oscar turns up on this doorstep he can’t believe his luck.

And when he finds out Oscar’s secret he can’t believe his ears!

Oscar thinks humans are silly and rather badly trained – but when the freedom of the town’s dogs is under threat, Oscar’s about to discover that a dog’s best friend is his boy.

Where do characters come from? In Oscar’s case I think he first came into my head quite a few years ago. Back then I had an idea for a picture book about a dog who didn’t like dog food so started to cook his own delicious meals. He was called Marcel.

I never wrote that picture book but the idea of a genius dog stuck in my head and didn’t go away. Last year when I started to write ‘Ask Oscar‘ I had the image in my head of a dog sitting on the top deck of a bus and a boy seeing him go past. That was the start of the first chapter and from there the story began to grow.

Children’s stories often have a child or family adopting a pet. In Oscar’s case, it’s the opposite – he’s the one who adopts the family and starts to change their lives. (In some ways I imagine him as a sort of four legged Mary Poppins!)

The heart of the story is Sam who desperately wants a dog, but unfortunately his parents are dead set against the idea. Sam and Oscar therefore have to work together to convince them.

In the book, I describe Oscar as having an intelligent face, but otherwise I was happy for Sarah to illustrate him any way she liked. I think her pictures perfectly capture the quirky, oddball humour of the story and the spirit of Oscar himself.

When I began character design for Ask Oscar, my two childhood dogs came to mind.

Our first dog Sandy was orange, very fluffy, and possibly part wolf – in character anyway. The second dog, Millie, was a highly intelligent sheepdog, terrier, collie-cross… “thing”. She loved watching TV and Neighbours and the Royal Ascot were her favourites, she also loved Yorkshire puddings, frozen ones, not fresh (there’s no accounting for taste)!

So I started designing Oscar with both these dogs in my mind.

Here’s one of the very first sketches of Oscar I submitted, whilst working on the cover. A slightly wild, and Sandy-esq version, with a bow-tie.

And this is the final character on the cover – bright and friendly with a stripy scarf.

My process is fairly traditional, I draw everything in pencil first. Once approved, I go ahead and begin the inking. I use a very fine mapping nib, Indian ink and some smooth, sturdy watercolour paper. I then scan it and import it into Photoshop and clean it up. Then I whip it over to Procreate on my iPad, and add some final texture just to give it some extra depth.

Here’s the moment Oscar arrives on Sam’s doorstep from sketch to final artwork.

I hope you enjoy reading the Ask Oscar series, I’ve certainly enjoyed drawing him and his friends.

You can buy Ask Oscar now from all good bookshops!

Alan MacDonald is the author of many books for children, including the bestselling Dirty Bertie series, which he worked on with award-winning illustrator David Roberts. His series Troll Trouble (Bloomsbury) has been optioned for film by Twentieth Century Fox, and Alan has also published picture book The Prince of Pants (Scholastic) with the illustrator Sarah McIntyre.

When not busy with books, Alan writes for children’s TV series such as Horrid Henry, The Tweenies, Boo! and Fimbles.

Sarah grew up in Derbyshire and now lives in London. 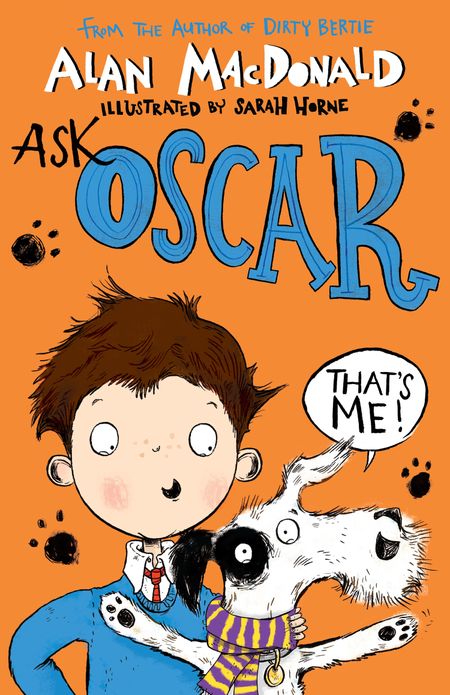